This past week I had the pleasure of reading Margaret L. Carter’s Blood Hostage. Carter drew me into her story straightaway with lots of action and multi-layered characters. For starters, her vampires aren’t your typical cliche monsters that leave a trail of bodies. They have their own code of honor with elders who police them. Instead of draining people, they’ll drink a little blood and then hypnotize the “donor” into forgetting. They try to keep a low profile, rather than draw attention from the police. Although Carter’s vampires are allergic to garlic, the myths about crucifixes and changing into bats are just that. They do have other supernatural powers, such as mind-melding with humans, and that’s only if the human drinks their blood.

Hal comes from a long line of vampire hunters, but he realizes that not all vampires are evil killers. Still, he’d never trust one. His beliefs are challenged when his cousin tries to save a girl from a dangerous vampire, Conan. Instead, Conan traps both people in his lair, leaving them at the mercy of his bloodlust.

The conflict will keep you turning the pages. It begins with page one. Hal’s been stalking Monique, a vampire. Seeing her as his only chance to save the prisoners, he drugs and imprisons her. Naturally, Monique’s furious with him. In her opinion, humans are mere “pets.” To her chagrin, Hal is immune to her hypnosis. Because the girl is Monique’s favorite donor, she grudgingly goes along with him, though deep down, she resents him and his family for hunting her kind.

Carter turns up the heat when the two feel a mutual attraction despite their differences. With just a few sentences, she weaves in the characters’ emotions and feelings to make the attraction believable. Adding to the conflict, Monique’s almost at the cusp of her heat cycle. She needs to mate badly, and the only vampire available is Conan, a rogue she detests. She must seduce Hal, or else risk surrendering to Conan. Hal’s been feeling his attraction to her from the get-go, so when their passions explode look out.

The conflict notches higher with their mission to rescue Hal’s cousin and the girl. Carter keeps going at a brisk pace, making every word count. Hal and Monique make an interesting team, and I hope Carter writes a sequel. I’d love to read more tales featuring these characters.

“Blood Hostage” is available in paperback in Margaret L. Carter’s collection, Ardent Blood, available on Amazon and most other major retailers. It’s a must-read for any vampire enthusiast. 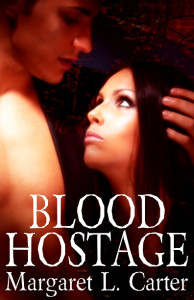