BLURB:
When Claire Luna is kidnapped and taken to a remote island, her predictable life is torn to shreds. She thought she understood grief, loss and loneliness. But nothing prepared her for the island.
Tucker Knight had his world turned upside down when he was a young teen. He’d known love, security and normality. But things changed, and somehow he lost his innocence along the way.
Barrier takes you on a compelling, thrilling and sometimes brutal journey of Claire and Tucker, who in a bid to control their destiny, must learn about trust and submission. And also about love.
The island is under the control of Dr. Stephen Bell, a scientist obsessed with the secrets of humanity through genetic engineering. Claire is part of his obsession, and quickly comprehends Bell’s twisted intentions. She is forced to decide between submission and life-altering consequences. In her desperate attempt to survive, Claire surprises Bell and Tucker with her strength to fight.
But, can she trust Tucker? Is he her enemy or her savior? Claire understands that to surrender means to survive, but can she endure? Tucker can’t help but be enamored by the spirited and determined Claire, but to survive, he must face and overcome his haunting past. Up until Claire’s arrival on the island, he had never thought himself capable, or deserving, but perhaps this was his chance to finally do the right thing. 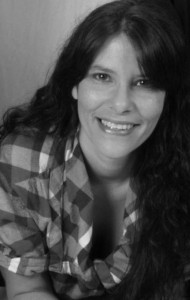 AUTHOR Bio:
I began writing many years ago and put it aside to raise a family. I put myself through college working toward a Bachelor’s Degree in Communication, which I have almost completed. I took every writing class that was offered and finally put pen to paper after dreaming of completing a novel for almost twenty years. In the meantime, I worked as a freelance journalist for a local newspaper briefly and wrote a personal blog while living in south Florida. I currently work as an Instructional Designer based in Austin, Texas. I am a mother of four and truly believe they are my greatest creation! Two of my children inherited my love of writing and I encourage them to write every chance they get!

The author will be awarding a $10 Amazon or B/N GC to a randomly drawn winner via rafflecopter during the tour.

Excerpt:
I dug my feet into the carpet. If I was to choose the path that surrendered me to this island, it would not be without a fight.
Tucker saw the defiance in my face, the change in my stance.
“Don’t do this, Claire.” He came closer. I didn’t respond. “Please, it’s just a few tests.” He was inches away. His voice was low. He shifted his eyes from me to the door.
I felt the betrayal I had on the beach, when I realized he was stopping me, keeping me here, like Bell.
He must have seen my skepticism. His expression twisted into hurt.
“I’m not your enemy, Claire.”
I braced myself for flight, poised like a cat ready to pounce. My knees bent slightly. I rotated to the balls of my feet for more sprint speed.
“Claire.” His voice was a warning.
I sprung. Toward the back of the house, where there were less guards.
He bolted after me. I was a tenth of a second faster than him. He made it to the door of the bedroom, just as I was closing it, his hands hit the door. I locked the knob. His fists slammed into the wood.
“Claire, don’t do this. Please, you don’t know him like I do.” He was talking about Bell. A painful burn filled my stomach. He was right. I didn’t know him like he did, which only reminded me he was the adversary. He was a part of the assemblage I was fighting against. He was who I was running from.
I pushed the window open, pushed the screen, and climbed out. My feet landed in the soft grass. I paused, looking in each direction.
The guards were at the front door, expecting me to emerge from the house with Tucker. Tucker’s pounding on the door would only give me seconds before they realized what I had done.
My knees bent and flung me forward. I ran toward the fence. If the barbed wired didn’t slice me to pieces, the tower guard would surely shoot me, but so be it.
I ran hard. My heart rate pounded in my ears like music, a rhythmic, steady, swift beat.
My hands landed on the fence, it clattered and sung from the impact. One foot lifted and fit snugly in one of the rungs of the fencing. My other foot lifted and almost made it into its place before strong hands flung me from my place. The hands hurled me to the ground. I thumped against the hard ground. I felt the air leave my lungs. Each breath was like sucking through a straw.
One of the guards was standing over me. He put one foot on each side of me and crouched down. He wrapped his hand around my throat. I closed my eyes. This was it, the moment I had prayed for since I had been snatched into that van. Surely he would kill me. 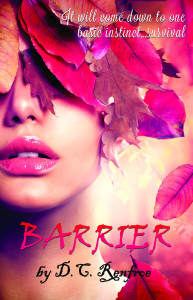