BLURB:
In a world where a virus has spread turning most of the population into flesh eating monsters, there are two friends partying it up in New Orleans when the infection hits. Far away from home, they are trapped and trying to make sense of all that has happened with the help of new friends and enemies along the way. Zombies aren't the only thing to fear...

AUTHOR Bio and Links:
N. D. Iverson is young author trying to find her niche in the world. She has a business degree; to which she is still trying to find a practical application for. She has bounced from half-baked ideas of becoming a forensic pathologist (cut short when the option for attending an autopsy came up and she rather quickly decided maybe that wasn't for her), a member of a rock band (sadly, neither she nor her friends could play instruments or sing, not that it's a requirement these days...) and many more. This Would Be Paradise is her first completed book, which has started a chain reaction of one-too-many book ideas dancing around in her head. She plans on wrangling in these ideas and making full-fledged books from them. So keep an eye out on the horizon for more works to come! For more information, please visit her website at: http://ndiverson.weebly.com/
You can purchase This Would Be Paradise here: http://www.amazon.com/This-Would-Be-Paradise-Book-ebook/dp/B01A00Q5JE/ref=cm_cr_pr_product_top?ie=UTF8 and at all major eBook retailers! 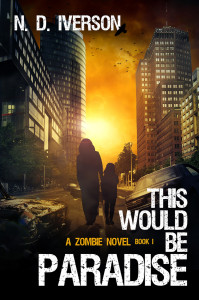 Excerpt:
The doors opened with a buzzing sound. The main lobby was devoid of people; even the receptionist behind the front desk was gone. Usually there was at least one person standing there with the phone glued to an ear. Did I sleep through a fire alarm or something?
I slowly made my way to the buffet area, looking around for a sign of life. Everything was set up but looked like it hadn’t been touched. Strange, considering it was already afternoon. Normally stale cereal and that one scary looking sausage that seemed to have been there all week would be all that was left by now.
I poured myself some coffee from the giant stainless steel percolator, watching the steam waft up from the foam cup. The smell alone helped invigorate my dulled senses. Sipping the hot liquid, I started to look around to figure out what was going on and maybe see about some maid service. We weren’t messy people, but somehow our hotel rooms always managed to look like a disaster zone – overflowing garbage, towels on the ground, running out of the mini-shampoo bottles sized for the head of an infant.
All the tables in the dining area were open, no one sitting around enjoying the mediocre hotel-provided food. I felt my hackles rise. Usually there was at least one person or group in here at all times. A noise that sounded like someone eating caught my attention and I stepped over to the booths that lined the wall.
“Hello?” I called out as I rounded the tall booths.
The sight that greeted me was not what I had expected. A woman covered in what appeared to be blood, was kneeling over a larger mass on one side of the booth. Her shirt was torn down the front revealing her daisy spotted bra and deep scratch marks on her chest. She snarled at me, flecks of whatever she’d been eating spraying from her red stained lips. I took a big step back.
She slowly got up from the booth, all her attention now focused on me like I had just insulted her outfit. I could see the thing she was on before much more clearly now. Holy shit, holy shit, holy shit! It was a man. There was a gaping hole in the body cavity, knotted intestines dangled down the side. I retched at the sight. Did I unknowingly step onto the set of a horror movie?
The woman had managed to get herself out of the booth, slipping a little on the blood coated floor. The coffee fell from my hand, as she started toward me, her face contorted into a feral mask. I took off running back the way I’d come, my earlier fatigue forgotten as adrenaline pumped through my veins.
Collapse