BLURB:
The Cairns of Sanctuarie: Volume I - The Bleikovat Event
Among the close-kin clans of western rural Malfesian Murians, farming and gelf ranches are long held traditions. Times are good…full barns, fat gelf calves and large families thrive among the sprawling grain fields and hamlets and the river from which they derive their name—the Feldon. Word comes with the trade caravans that times are not so good in the regions far to the east of the Feldon River: tumultuous changes stir among the remote province of Bleikovia. Old timer Feldovats shrug it off as one more squabble between clans over boundaries or water rights…too distant to affect the Feldovats.
The western clans learn too late, however, it is no local squabble. Outnumbered and unprepared, Feldovats resist a hoard bent on plunder and conquest. Days of battle along the Feldon River stain the riverbanks in green Murian blood. In the finals days of exhausted fighting, Judikar Klarvko Celo, leader of the Clan Klarvkon and the Feldovats, is fatally stabbed with the slow-acting sevon poison. The Judikar’s consort, Etikaa Klarvkaa, becomes Regentkaa, and with Celovat Field Commander Korvo Celo serving as her advisor, she leads the demoralized Feldovat survivors on a gruesome ill-prepared winter trek through high mountain passes of ice and blizzard snow in an attempt to elude the Green Dragon forces of the Bleikovats.
Etkaa’s only son, Klarvko Celo II, helps spirit Feldovat young across a remote mountain exodus to the west toward Eedov Province. The battered, starving Feldovats reach the Malfesian coast at Eedov City only to be confronted with their implacable enemy determined to destroy the remaining Klarvkon rabble. Taking passage on crowded lumbering Maalonovion freighters, Feldovats and Malfesian refugees set sail. On arrival in Maalon City they are welcomed among their Maalon hosts, and settle into a new life.
But famine and a pandemic pestilence stir old hates and nurse former ambitions. The enraged Overseers of Bleikovia move against the Klarvkons, this time bringing bloodshed to Maalonovia. The exiles from the Feldon must fight once again, but starvation and plague across the Planete Myr make it a different war from the battles along the Feldon…a na’ä blikovat…the Bleikovvat Phenomenon…an event with unexpected consequences and outcomes none could have foreseen.
Before the vendetta killing is exhausted, the Regentkaa Klarvkaa and her son are swept onto the Maalon throne, setting the Klarvkon Dynasty and the Murians toward an intergalactic golden age, and a star-flung destiny the once-agrarian Feldovats could never have envisaged.
~~~~~~~~~~~~~~~~~~~~~~~~~ 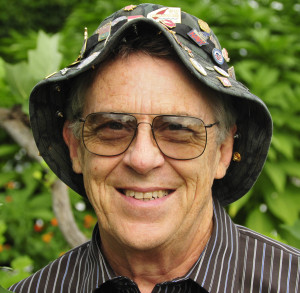 AUTHOR Bio and Links:
Welsh and Scottish Hawk MacKinney grew up in northwest Arkansas, and wrote for his school newspaper. Hawk served over twenty years as a Special Staff Corps Officer with the U.S. Navy and U.S. Marine Corps, a Naval Academy Blue and Gold Recruiting Officer, a Navy Recruiting Command Liaison Officer, and Commanding Officer of units attached to the U.S. Marine Corps bases at Parris Island, South Carolina and Twentynine Palms, California. Along with his postgraduate degrees, he studied English and Russian history and foreign languages. As a faculty member in major medical and veterinarian universities, he authored professional articles and taught postgraduate courses in the United States and Hadassah Medical School, Jerusalem. In addition to his sci-fi series, The Cairns of Sainctuarie, Hawk MacKinney has authored the Craige Ingram Mystery Series and Moccasin Trace, a historical romance nominated for the prestigious Michael Shaara Award for Excellence in Civil War Fiction and the Writers Notes Book Award.
www.hawkmackinney.net
https://www.youtube.com/watch?v=-m-H8pfoh-A
Buy Links:
Amazon: http://www.amazon.com/Cairns-Sainctuarie-Bleikovat-Event-Book-ebook/dp/B00A6BR6YG/ref=sr_1_7?ie=UTF8&qid=1406718551&sr=8-7&keywords=hawk+mackinney
Barnes & Noble: http://www.barnesandnoble.com/w/the-cairns-of-sainctuarie-hawk-mackinney/1113367156?ean=2940015906448
Sage World Publishing: http://www.sagewordspublishing.com/fantasy.shtml
Hawk will be awarding a $25 Amazon GC to a randomly drawn winner via rafflecopter during the tour.
a Rafflecopter giveaway
< script src="//widget.rafflecopter.com/load.js"></script>
~~~~~~~~~~~~~~~~~~~~~~~~~ 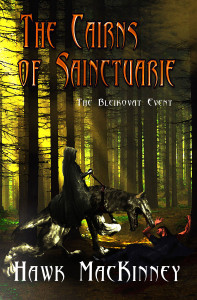 Excerpt: Prologue
The catafalque of the old Dowager Queen rested on the high rostrum of the Temple of the Goddess Myraa. There was little ceremony to the cremation of dead. Yet, all that had passed made this requiem for the Dowager Queen Klarvkaa Etkaa Bremanova Celovaa Bremanova symbol of the changes which had swept so many lives. Long annuals before the ascendancy of The Klarvkon Dynasty, the massive wood and granite Temple to the Goddess Myraa had been destroyed in the firestorm which laid waste Eedov City. After the close of the Malfesian War the temple was rebuilt, but not the city. On the ashes of the old temple, immense columns rose above the sanctuary and vaults. Iridescent alabaster and polished marbles greeted pilgrim supplicants who had come to the shoreline plains washed by the Green Sea.
Dowager Etkaa Klarvkaa…wife, myäat, founding matriarch of the Klarvkon Dynasty, gave hope from a time without hope. As was her wish, she would be cremated on the soil of her birth, her ashes to mingle with those of her consort, Klarvko Celo. Their son, His Imperial Majesty Klarvko Celo the Second, decreed it would be. At the enormous base of the great temple…a spectacle never seen before and seldom since those times, came an undulating ocean of banners. Some of clans which no longer existed, even the once-hated Green Dragon of Bleikovia. Murians had taken her to their hearts…and never relinquished her. Her shadow would reach across the centuries, and measure all who followed. 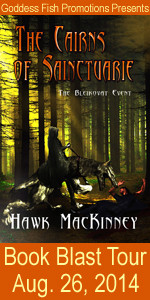